Believe Me When I Say…

Nobody wants to be the person that accidentally implies that someone else is fat.

(If you do, you miiiiight be an asshole.)

Now, we could have an entire discussion just about the concept of being fat, what constitutes it, how it becomes a means to shame others, etc. That’s not really what this post is about, or why I’m writing it, but it is an important conversation.

Let me back up a moment. During last night’s class, I tried to do the New Hot Trick (TM), called a Superstag or Gargoyle. And, I couldn’t. After numerous attempts in which I could not reach my top foot for the necessary lock, and trying to figure out the issue, it came down to me realizing that I simply could not flatten myself against my thigh enough to reach the foot.

Why? Because I carry extra weight.*

I have boobs. I have weight around my middle. Now, I’m not really plus-sized (I’m a Middler, between straight sizing and plus, at a 10/12), and I’m not really someone who carries all of my weight in my middle (not an apple, so to speak). I’m more hourglass with a bit of pear. So, I don’t think most people would look at me and think that this would be an issue in my forward fold, but it absolutely is. 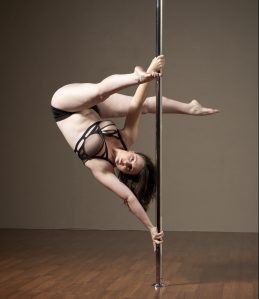 In the move, I can get my chest to my leg, but the weight – the boobs, the tummy – block me from flattening. I have a good few inches of flesh in the way from squashing in enough to get to the foot.

When I tried explaining this to my instructor, she insisted it was something else, and I hit this wall of frustration. I’m still trying to unpack why, but I think I have it:

A) It’s very frustrating to not get a trick, especially one that seems like it could work for you.

B) It’s upsetting to recognize that your body is a contributing factor – and that it is something that you could, maybe, change…which makes it feel like it’s more your fault, like you’re more of a failure.

I think the reason why people automatically don’t believe me when I say that I have extra flesh that gets in the way is because we are (generally) conditioned to be nice. That is, nobody wants to be the person who implies that someone else is fat (or heavy, or carrying extra weight, or whatever). This is true to the point that people will outright avoid even acknowledging it, which in a weird way, almost feels worse than someone just saying, “Oh, you know, maybe that’s an issue.” Or maybe it doesn’t feel worse – I’ve never had anyone acknowledge it, and that might really suck, too!

It’s also sometimes hard to tell what is an excuse for an excuse’s sake, or what’s an excuse because it is truth (aka a reason), and that puts people in an awkward situation. So a lot of well-meaning denials occur.

It took me sitting on the floor, demonstrating that my chest and torso were fully against my leg, and that I couldn’t go any further, for my instructor to consider it for a bit. And, because she is an excellent instructor who works very hard to find variations and adjustments for people of all body types, she listened, asked questions, allowed me a space to feel heard and accepted, and we talked about possible variations to help me get it. I’m exceedingly grateful for her and the way she teaches – I know that many, many other instructors would not have done this, nor created a space the safely talk about it. I was moments away from crying in class, and probably would have gone out to my car and cried all the way home, had she not taken a moment to listen to me.

If you’re an instructor, and you have a student who has this issue, consider listening to them and working with them to find a solution/variation/alternative. Denying it does little, but listening? It can mean the world to your student.

*Now, to be fair to my instructor, she was right in a way: it’s not JUST that I have extra weight. I also am blessed with a long torso! Which is great sometimes, but when it comes to trying to reach my average arms down the length of my body to my feet in the way that is required for this move…it’s not so great. I joke about having T Rex arms, but it’s not really so much that I have short arms, as that I have a long torso and weird, limited flexibility. So, all of these things combined with my extra padding added up to me not getting this trick.