If you’ve watched a lot of Jenyne Butterfly performance videos on YouTube (God knows I have), you know she’s amazing. She has such astounding control in everything she does. One of the things I have seen her do a lot is a specific “tumble” down the pole, and every time I see it, I’m equal parts impressed and envious. I don’t think I’m alone in that respect. 🙂

While watching elite competitors, I tend to automatically look for the tricks I know how to do, or tricks I think might work for me, in hopes I can learn them or perfect them, or learn how to effortlessly put them into a dance (as opposed to, “Okay, gonna invert now.”) The Jenyne Tumble is one of those combos that I didn’t think I’d be able to do for years. Literally. It just looks so hard to me!

Cut to class last night at TPG. With Drea absent from teaching (Happy Anniversary!), Jo was subbing. We had a small class, since none of our usual students showed up for whatever reason – it was me and a gal doing a make up (Michelle). It was SO their loss! We had a great class with the three of us. Jo ran us through some spins, including a few I hadn’t learned, which was fun, and then she worked with us on the Iris (I think that’s the name?), which I had learned the week before with Drea – it’s a variation on extended butterfly: 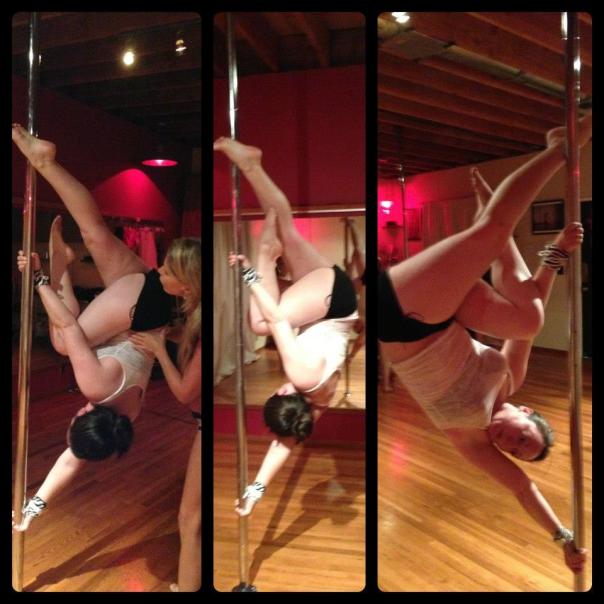 As you can see, Drea is spotting me in the first attempt, but I moved along to doing it on my own by the end of the class! I got it fairly quickly for me – it was good to try it again in class this week, too! It comes from the extended butterfly (which I’m doing with twisted grip), and once you’re in that trick, you bring your outside leg back to the pole, hooking at the top of the foot/toes, then you bring your inside leg down into a tuck/crunch inside your upper arm. It’s a pretty pose, and if you’re strong at aerial, you can throw it into an aerial sequence. I think it’d also be pretty on spinning pole. I’m not quite strong enough in my aerial to include it in a combo, but I’m close!

The big project of the night, however, was learning the Jenyne Tumble. She does it in this video around the 1:58 mark:

Now, on my first attempt, I got confused after the sit on what to do with my bottom arm and aborted the mission. Second attempt? Quite nearly fell on my head. Jo had to catch me, and she did so about a foot off the ground (Thank you!). My mistake in that run – after watching her break it down again – was that I released my top leg before securing my lower arm. So, you know, DON’T do that. 🙂 But, I kept at it, and by the third or fourth time, I was so much better! I damn near cried when I got it right after falling. Persevere, y’all. Anyway, this video was my final attempt at it. While I still have work to do on making it fluid, as well as on the control issue (I’m still shaky on the “leap of faith” moment in the middle), I’m still thrilled that I went from falling on my head to being able to work through it. 🙂

Also, if you’re curious: I am wearing the new tank and shorts from our pole apparel line, Poleitical Clothing! We had a great launch at CPDC, and I’ll post on that soon. But, in the meantime, check us out on Facebook, Twitter, and Etsy, which is where you can purchase items from us! The full link for the online store is here: http://www.etsy.com/shop/poleiticalclothing We’re still working out the kinks in that system (i.e. delivery costs), but it is open for shopping! I also am wearing my wrist wraps from Vertical Swag, which have been helping stabilize my wrists while I work on aerial, and my heart rate monitor to track calories – that’ll be a new post soon, too!